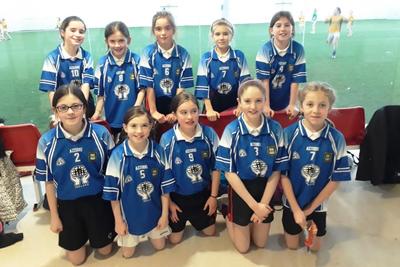 10 of us- Éadaoin, Méabh, Alisa, Ava, Beatrice, Aoife, Sophie, Grace, Melissa and I got picked to go to a football competition with with Ms O’ Brien and Ms O’ Connor. It was called “Peil faoi Dhíon” and was held in Mallow on Tuesday the 5th of December 2017. It was a sport which had the rules of Gaelic football but instead of a goal net you had to score into a round hoop 2 feet in diameter hanging off the wall.

At 10 o’ clock we headed off on a mini bus with our teachers.  We chatted along the way.  After about an hour, we arrived into a really big building – The Mallow Sports Complex.  We walked into the huge AstroTurf field and saw a big hoop at both ends of the field.  Not a normal hoop as it was attached to the wall with the circle hole facing out.  It was twice the size of a basketball hoop.  We were early so we practiced on the field for a little while. We played four teams.  Here are the scores;

Overall, our team had won the most matches.  Everybody was happy.  After we had a bit of lunch we went back to school on the bus.  When we got back to school, all 10 of us were beaming as we had such a nice day.